One moment Maggie was there. And then she wasn’t.

my last photo of Maggie

How I could be so shockingly, senselessly stupid? Can I blame endorphins? Early Saturday morning, I rode downtown and took an exercise class. Then I headed over to Lafayette Street, which was closed to car traffic for Summer Streets, an annual event billed as “part bike tour, part walking tour, part block party.” The plan was to ride up to Chelsea, where a young chef friend was doing a cooking demo.

The day was lovely, a bit cloudy and not too warm. The street was full of people strolling, chatting and cycling. I saw two Bromptons outside Bicycle Habitat, and stopped for a nice talk with the owners. It was such fun to sail up a normally car-choked street! My cheeks ached from grinning.

When I reached the site of my pal’s demo, I parked Maggie – unlocked! – and darted into the crowd for a minute to look for my friend. A minute was all it took, of course. A man standing nearby said he’d seen a guy unfold Maggie and ride away. “You should have locked it,” he said. Gee, thanks.

The police arrived quickly, took my statement and didn’t make me feel worse than I already did. They were impressed that I was able to email them a photo of Maggie and provide her serial number. They were not optimistic that I’d see her again.

I got home, curled into a ball and cried.  Mr. Unfolded listened patiently to my breast-beating, then encouraged me to go buy a new bike. “I don’t deserve a Brompton!” I wailed. He rolled his eyes, agreed I’d done a really stupid thing, and told me to get over it. So I let him drag me to NYCeWheels.

This time, I opted for an M6L. The 2014 model (same as the 2013) has several improvements over the 2012, including better brake levers and a sturdier chain guard. In homage to Maggie, I stayed with black, a Brooks saddle and a blue/black Mini O bag. I added a set of  Origin 8 Light Bars, sleek and very bright.

I picked up my new bike on Monday. Name is still under consideration as we get acquainted. The Brooks saddle is comfortable already, and I’m experimenting with all the combos that six speeds allow.

And I am never, never letting this one out of my sight. My Saturday euphoria, and the festival atmosphere of Summer Streets, lulled me into believing that NYC is a benevolent place – a heartbreaking, costly mistake that I won’t make again. Homeowners’ insurance will likely cover most of the expense, but I feel like I’ve lost a friend.

Goodbye, Maggie. You served me well, and I should have looked after you better. I hope your new rider enjoys you as much as I did. 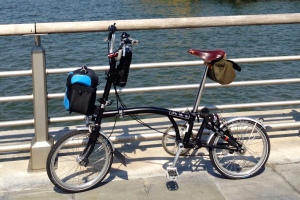 Here are Maggie’s details, should anyone happen to see her:

I live in Manhattan with a husband, two cats and a Brompton M6L named Monty. Contact me: unfoldednyc at gmail dot com (you know what to do)
View all posts by Unfolded NYC →
This entry was posted in Uncategorized. Bookmark the permalink.

The Crazy Randonneur
The Brompton Diaries

Aussie on a Brompton