Monty and I were riding along when his wheels suddenly locked. There wasn’t much traffic, fortunately, and I carried my stricken boy to the sidewalk for a look.

A twig had wrapped itself completely – and very tightly – around the rear sprockets. It took me 20 minutes to pick it out. I’m glad I had a hand wipe in my bag, because this delicate operation left me covered with grease and (of course) I was wearing pale blue cashmere.

Unwilling to risk further damage to Monty’s innards, I bundled him into a cab and took him to NYCeWheels.

I had threaded the chain on not quite correctly, and knocked the chain tensioner out of alignment. As always, the NYCeWheels guys were accommodating (with nary an eye-roll over my chain-related ineptitude). A quick fix and we were on our way!

I’m not sure which pained Monty more: the indignity of being ferried in a taxi, or the revelation that his rider is mechanically clueless.

In any event, this little pocket knife is now tucked into the Mini O, just in case Monty ever needs rescuing again.

The Brompton Diarist came for lunch on Saturday – drawn, she admitted, as much by the house’s felines as its people (and I’m totally fine with that!) – with a selection of marvelous cheeses, all new to me, all delicious.

After lunch we’d planned to join the Saturday ride at NYCeWheels, but with one thing and another we missed the group. No matter; we created our own adventure, riding up the East River bike path, where Basil and Monty paused for a photo. 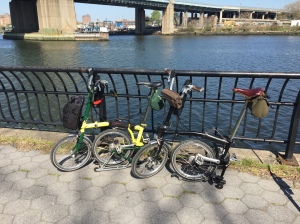 Then across town and up the Hudson River path to Fairway. All told, about 16 miles, a nice prelude to Sunday’s 40 (well, 50+, counting the to and from).

After I met the Diarist, we drank coffee and waited for the start.

Takeoff was a bit draggy – all those people and bikes! – but the crush soon thinned out. I lost the Diarist almost immediately. Must work on my riding-with-friends skills.

I was too busy enjoying the day to take many photos. 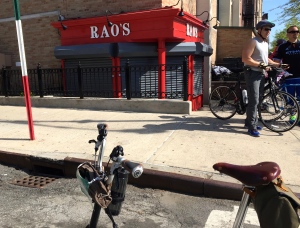 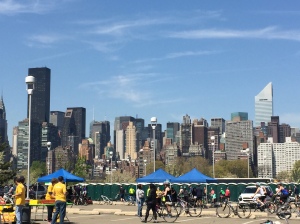 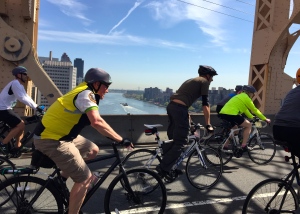 Relaxing on the ferry ride back to Manhattan – 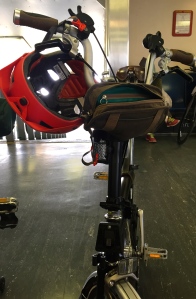 Conscientious rehydrating and refueling throughout the day made a difference, I think. I need to be more generous with sunscreen; my arms and face burned slightly. And it may be time to invest in a pair of cycling shoes. Although I love my brightly colored Merrells, they’re not comfortable enough for long rides.

Overall, my second Five Boro was terrific. The ride itself is not particularly challenging – except for the Verrazano climb, a breeze compared to last year – but it’s a unique way to see NYC and revel in the pleasure of doing so under your own power. Along with 31,999 other like-minded souls!

Monty and I left home early today to pick up our credentials for Sunday’s Five Boro Bike Tour. Our destination was the Bike Expo at Pier 36 on the East River – an opportunity to ride the lovely waterfront bike path at Manhattan’s southern tip. 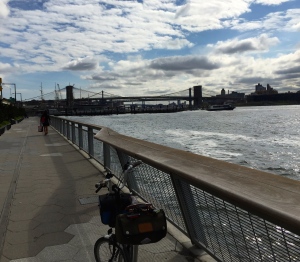 This will be my second Five Boro. Last year I was excited but apprehensive about my first big organized ride; this year, with several such events under my belt, I’m just excited!

Such a pleasure, even when the wind is fierce. 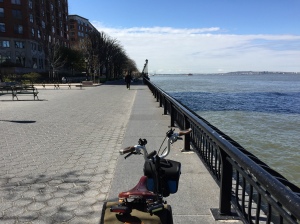 The phrase popped into my head during this morning’s rain-soaked ride. (Yes, I realize that would be durant rather than après, and I am hardly a doomed French king. Take it up with my subconscious.)

I don’t mind, as long as I’m dressed for wet weather. Today was a first trial-by-water for my Club Ride pants: billed as breathable/wickable/water-resistant/fast-drying, they performed as advertised, drying almost completely during the hour they were in a gym locker. And except for the reflective trim on a zippered side pocket, they don’t scream cycling gear. Comfortable, too.

This was also my first damp ride in new Merrell sandals, and I’m likewise pleased – the sole is a good balance between rigid and flexible, it grips the pedals well, and the sandals feel great. They look no worse for their drenching. I expect these will get a lot of wear this summer.

(Note: I have no relationship with either Club Ride or Merrell – just a satisfied customer.) 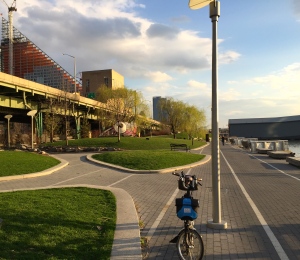 Not yesterday, at least, but the season has just begun.

It could not have been a lovelier day for the Tour de Staten Island. Monty and I left home at 6:15 am and rode to the ferry, where we found a few other Bromptoneers who had arranged (via Strava and Facebook) to meet.

Everything I needed fit into the Carradice bag, so I left the Mini O at home – one less thing to wrangle, I figured.

We rallied the Brompton troops at the start. That’s John and Newton on the left; on the right, Peter of NYCeWheels and David. Not shown is Peter’s pal Abel, and I’m kicking myself for not taking a pic of the (non-Brompton) bike they were riding: a long orange affair, with a seat on which Abel faced backward, leaving Peter to pedal while he played DJ with a large and gratifyingly loud speaker. 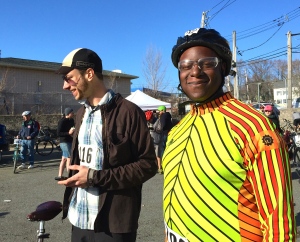 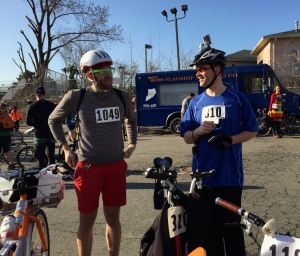 It was fun, and motivating, to bop along to Michael Jackson, Steppenwolf (!) and other musical legends while we rode.

By the time we reached the first rest area, I was rethinking my plan to do the 55-mile route. It was a good call: 35 miles were quite challenging enough, thank you. There were lots of hills – mostly the deceptively gentle ones that seem to go on forever – and the roads were in serious disrepair. Twice I had to dismount and walk a block or two. I need to work on improving leg strength or I’ll never make it up and over the Verrazano Bridge at next month’s Five Boro.

The ride’s highlights, for me, were Fresh Kills Park, a carless 5-mile stretch, and the FDR Boardwalk, a wide paved path that runs along the water.  I took hardly any photos, but did stop for this shot on the beach.

And this view of Manhattan. 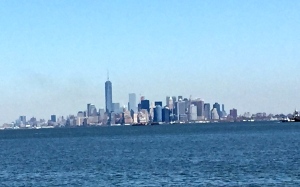 Near the end, while I was catching my breath at a stoplight, an acquaintance who’d watched me walk up a hill said, “Your bike could have handled that!” Any power deficiency was in the rider, not the bike, I told him. Sigh.

It was a good start to the season. And a wakeup call that I need to work harder between these long rides in order to get the most out of them.

In preparation for the Tour de Staten Island, Monty and I set out to circumnavigate our island via the Greenway. We didn’t, quite, but an exceptionally windy day (why are they always head- rather than tailwinds?) gave us a good 20+ mile workout.

To balance all that legwork, first I biked to Tribeca and took a Bar Method class. It hurt. The instructor laughed at my pain-face.

On the way to the bike path entrance at Chambers St., I stopped at the Tribeca farmers’ market and bought a chocolate cherry roll from Hot Bread Kitchen. (Not the last carb/fat/sugar bomb of the day. Stay tuned.)

Despite the gusts, spinning along the waterfront Greenway was lovely. 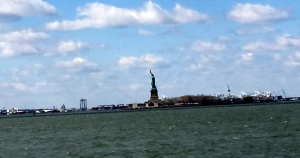 We paused under the Brooklyn Bridge.

The path got hard to follow after this – I’m so spoiled by its West Side cousin! – but soon I was at East River Park, a charming place. Aren’t these seal sculptures fun? 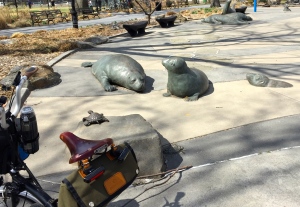 The park’s Fireboat House, a historic structure that now houses the Lower East Side Ecology Center, has a green roof.

Even more important, it has a reasonably clean public bathroom, with stalls large enough to accommodate a partly folded Brompton. 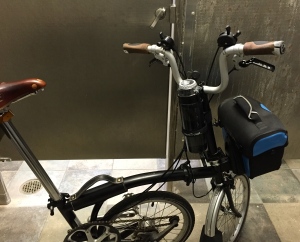 I enjoyed riding up the East River. The path got lost to construction around 34th St. so I moved west to 1st Ave. for a while.

Back to the Greenway, around 82nd St.

We sailed along until the path was cut off at 116th. 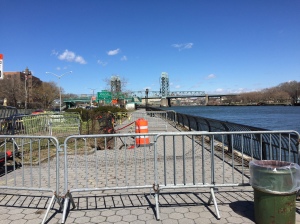 I had to backtrack and take a pedestrian bridge, thoughtfully equipped with ramps rather than steps, across the FDR Drive. 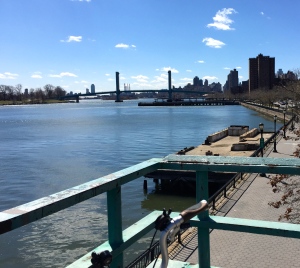 I considered heading north and picking up the Greenway again, but decided to call it a ride and go home. Monty and I will make it all around next time.

I’m so pleased that my hands, which gave me such trouble last season, feel fine. With a lot of practice, my handlebar grip is now relaxed, even in high wind and on scraggly road. I’ve also learned that Monty and I can take ruts, potholes and other urban scree in stride, without falling.

Such an improvement in skill and confidence should be celebrated, no? Mr. Unfolded, bless his wicked heart, brought home a box of doughnuts from Dough. Both chocolates are mine; he knows me.

Posted in Monty, my town | 2 Comments

Everyone needs a fashion signature.

My first adult bike helmet (maybe my first ever – I don’t recall wearing one as a kid) was gray. So was my second. The third would have been too, but the shop only had the Giro Feature in red, and the sales staff persuaded me.

As it turned out, I loved my newly red head. It looked great with the black Brompton and black/blue mini O bag, and reminded me of the kind of rider I want to be: bold, adventurous and fearless. It made me easy to spot, too. 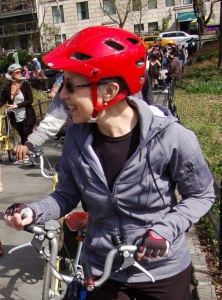 Helmets don’t last forever, especially when you fall and land on your head. New season, new helmet! I decided to stick with the Feature – I appreciate its coverage and comfort – and tried a few local shops before I found one in my color at Danny’s Cycles  in Chelsea. (Red helmet #1 came from their Canal St. location.)

This year’s model is a cool matte red, with an orange visor and camo straps.

Sunday was cold but sunny, a good day for running errands. After picking up the helmet, I rode up 6th Ave. The bike lane is less crowded and in better repair than 8th Ave., but ends around Times Square.

And the lake behind Bethesda Fountain is still icy.

Spring blooms are popping up at the farmer’s market! 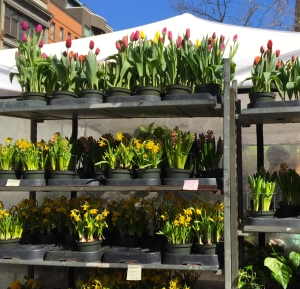 I bought some beautiful micro greens (pea shoots and radish sprouts), a head of garlic and a bag of Amish pretzels (Mr. Unfolded’s favorite snack). 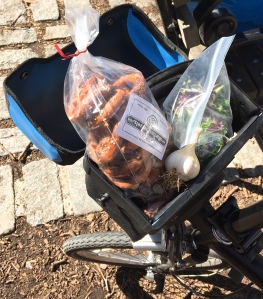 An odd, charming encounter: While I was waiting for a light to change, an old man with white hair and twinkly blue eyes shuffled up to me and smiled. He leaned down to pinch Monty’s front tire, gave me a thumbs up and shuffled off.

Maybe it was my red helmet?

The free Strava app is a snap to use: just hit ‘record’ when you start, ‘stop’ when you end.

It captures details – distance, elevation, time and speed – on each ride segment.

There are lots of other features to explore, as well as a premium version ($59 per year), but I’m happy with the basics for now.

The Crazy Randonneur
The Brompton Diaries

Aussie on a Brompton